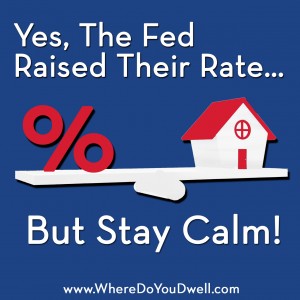 The Federal Reserve raised their rate, but don’t panic! Let’s explain what the Fed rate is and how it affects the mortgage interest rate for your home.

The Fed raised their rate, not yours

The Federal Reserve voted unanimously to increase the Federal Funds Rate by .25% from zero, where it had been for the previous seven years.

Banks and other depository institutions are required by law to have a reserve balance. This is the money they can lend out to other banks, sending funds back and forth while trying to stay as close to the reserve limit to ensure proper levels.

Why did they raise the rate?

The reason the Fed raised the rate is because the economy is stronger, unemployment is lower, and income is rising. This is all fantastic news about the U.S. economy overall.

Remember, the Fed lowered rates to zero years ago to boost the economy and to get it and the housing market moving again. Dubbed the Great Recession, the country was in crisis mode and lower rates DID spur on buyers and sellers to revive housing, especially in the DC metro area.

Now 7 years later the Fed thinks it’s time to raise rates since the economy is better. Here’s why you shouldn’t be overly concern or worried if you’ve been thinking of selling or buying in the coming year.
We are here to tell you it’s still going to be a good, stable housing market for both buyers and sellers.

How does this increase change things for buyers and sellers?

Buyers and sellers who are already financially stable and able to buy a home today will still be on the path of homeownership even if rates continue to increase.

Most buyers will not be out of reach of buying their first home or moving up to a second or third home. Many economists predict the housing market will not reach any scary high rates that roadblocked home sales in the past.

Some buyers may have to buy a less expensive home in areas where home values are already high or because their budget was already tight to begin with. We may see a rush to sell or buy initially, especially by those on the sidelines that were already challenged with the market.
However, the market WILL self-adjust to a healthy momentum eventually. Why?

As you can see, there is no reason to push the panic button!

Check out this cool video from The New York Times that’s just like an easy-to-understand tutorial on interest rates.

And, please contact us at any time if you want to go over the impact you may experience as a buyer or seller in the coming months.

“At each home, Amy carefully discussed the pros and cons of each place. When our offer was accepted Amy walked us through the entire home with the inspector and helped us negotiate a better price. We ended up spending less than we had anticipated! The whole experience was fun, exciting, and easy. While this was my first big expense in my adult life, Amy made it stress free. I would highly encourage her services to anyone.”