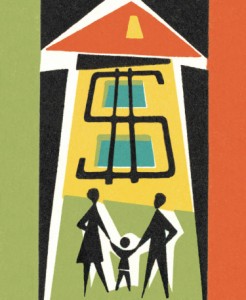 U.S. home prices increased in April for the first monthly gain since last autumn, according the S&P/Case-Shiller Index. The 20-city composite index gained 1.3% with 19 out of 20 cities registering gains. Of the 20 cities measured, only Detroit took a step backward with a 3.6% reversal.

Home builder sentiment is highest level in five years, according to the National Association of Home Builders. The NAHB/Wells Fargo Housing Market Index rose one point from the month before to 29. The single-family home sales component rose to 32 in May, its highest level since April 2007.

The national median home price was up nearly 8% in May compared to the same month last year, according to the National Association of Realtors. The last time the housing market posted three consecutive monthly prices, year over year, was March to May of 2006.

Sales of newly built homes climbed to the highest level in two years, according to the Commerce Department. New single-family homes sold at a seasonally adjusted annual rate of 369,000 in May, up 7.6% from April and nearly 20% from a year earlier.

I can honestly attribute Graham’s perseverance to my successful purchase. As a result, I got the unit that I wanted, in the exact location that I wanted to live – and for an incredible price. Really, what more could you ask for?”