The DC metro real estate market “righted” itself in February after experiencing weather-related declines during the previous month. With the snow melting away, the region saw more activity in contracts, listings, and sales, according to data analyzed by RealEstate Business Intelligence (RBI).

Buyers and sellers could breathe a sigh of relief as the apparent dip in January new listings was an anomaly and the market has resumed its steady and consistent growth pattern again. 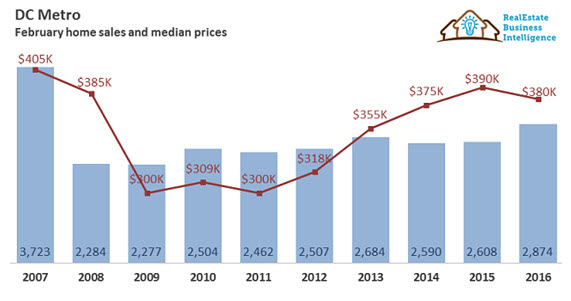 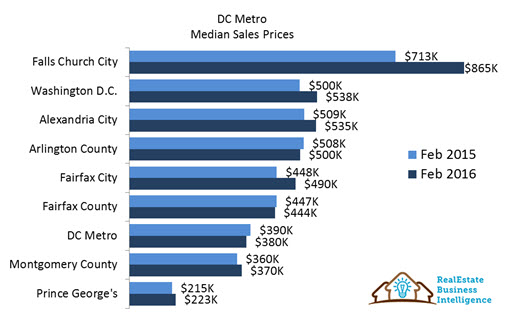 Despite the drop in overall median prices in the DC metro area, there was promising news:

Closed Sales – The region saw a 10.2% increase in the number of closed sales with 2,874, compared to last February.

February 2016 marked the largest number of closed sales since the peak of 2007, which had 3,723.  Recent data show that the region continues to show steady growth in sales since 2014. All property types saw increases in sales last month.

Across the DC metro market, most jurisdictions saw increases except for Arlington County (-11.3%), Alexandria City(-12.7%) and Falls Church City (-75% based on going from 12 to 3 sales). Fairfax County had the largest number of sales with 834, a 9.2% increase from last year.  The District saw a 4.0% increase, Fairfax City 40.0%, and Montgomery County and Prince George’s County both with a 19.9% increase. 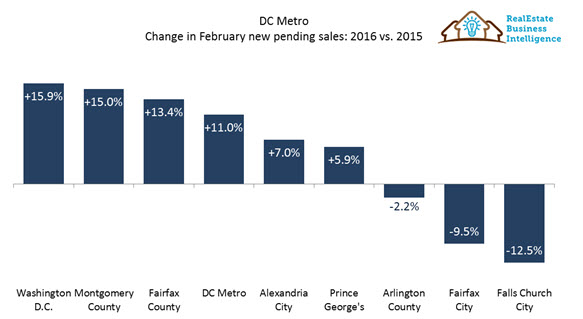 New Pending Sales/Contracts – The District had the largest jump in pending contracts, up 15.9% from last year.

Inventory/Active Listings —  Inventory was slightly above the 5-year February average of 7,879 with a total of 8,293 this month.

February marked a 1.4% increase in month end inventories from last year and just about equal to the previous month. Both condos (+4%) and single family detached homes (+2.1%) were up, but townhomes (-4.3%) were down compared to 2015.

Jurisdictions within the DC metro region were split in terms of year-over-year increases in inventories – The District came out ahead with +12.4% increase, along with PG County at +7.1%, and Fairfax County at +5.4%. Showing a decline from last year were Arlington County (-2.2%), Montgomery County (-7.5%) and Alexandria City (-12.9%).

Homes in the District sold at 99% of their original list price and up slight from the previous year.  Except for Falls Church City (with only 3 sales), all other jurisdictions experienced a ratio of 95.1% and above, hovering close to the previous year’s ratio.

Days-on-Market – The median DOM was 44 days, up by two days from last year.

Homes in the District had the lowest median DOM at 20 days, same as last year. Fairfax County was at the other end of the spectrum with a median DOM at 62.

Single-family detached homes were taking 50 days to sell, while townhomes were at 35 days. Condos came in at the middle with a median DOM of 47.

Words alone cannot describe Jennifer. She possesses an amazing personality and presence. You just have to meet her. Jennifer is extremely knowledgeable, professional and particularly in my case, patient. She took my vision of the prefect home and wouldn’t let me settle until we found it. A true passion for her work, friends, family and hobbies are evident. She definitely fulfilled all of my real estate needs. I look forward to working with her again.