The DC Metro real estate market had its own version of “March Madness” with increases in sales, new listings and inventories.  According to an analysis by RealEstate Business Intelligence (RBI), the March housing market achieved some new highs in several key measurements, demonstrating continued strength and confidence. Despite a slight drop in overall median sales prices for the region, prices are still above 5- and 10-year averages.

This is good news for both buyers and sellers, helping to keep expectations positive as the spring selling season kicks off.

Here’s a recap of the RBI Market Update: 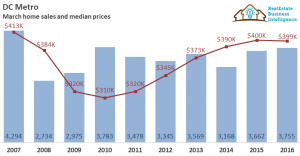 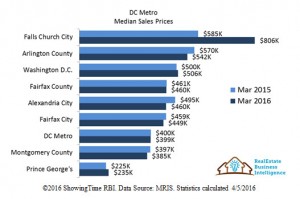 Prices by Jurisdiction – Most areas experienced a slight dip in sales price compared to March 2015. 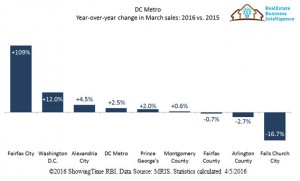 New Listings —  March experienced a 20% gain compared to last year, with all property types showing growth of about 20%.

Inventory – Washington D.C. had the largest increase in inventory of 21.9%, with 1,268 active listings.

Average Sales Price to Original Listing Price Ratio —  The region saw an overall 97.1% ratio, the same as last year and up from last month’s 96.7%.

Days on Market – Condos were the fastest selling properties, with a median DOM of 24.

We went through a few realtors before we decided to go with Jennifer. She was completely on top of things, had ready answers to all of our questions, anticipated our needs, and easily identified what we were looking for in a house. She was the best Realtor we found in terms of competence, knowledge, skill, and fun! We’d recommend her wholeheartedly to anyone, and will definitely choose her whenever we are looking to change homes again.