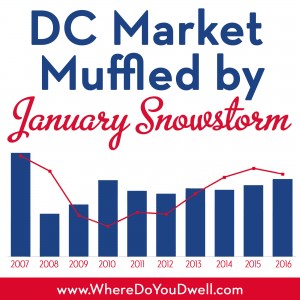 The January snowstorm forced the DC metro market to retreat to the toasty indoors, most likely causing the month’s slow down in contract and listing activities for the first time in over a year.

Despite these snow days, closed sales still remained strong and were up in all property segments, according to an analysis of January market statistics by RealEstate Business Intelligence (RBI).

As 2016 gets underway, there were several positive signs for both buyers and sellers in January despite the weather onslaught across the region: 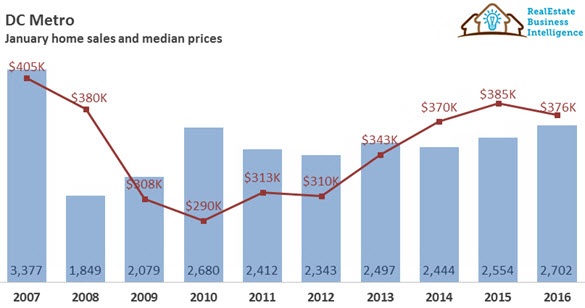 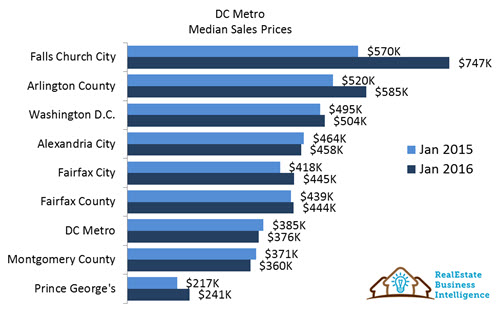 Closed sales exceeded both the 5-year and 10-year averages for the month of January.

The region had 2,702 closed sales in January, up 5.8% from 2015. All property segments saw increases. Across the region, Prince George’s County saw the largest increase in sales with a jump of 17.7% from last year, at 599. Fairfax County has the largest number of closed sales with 743, a 5.4% increase.  Other jurisdictions with increases included Montgomery County at 9.1%, and Arlington County with 0.7%.  The largest dip in closed sales was the City of Alexandria with a decrease of -23.8%.

The January snowstorm put a -8% chill on new pending sales with 3,423 contracts, that’s 6.8% below the 5-year average and slightly below the 10-year average.

Again, the snowstorm is the likely culprit for -5.3% dip in new listings across the region, except for the District’s 11.9% increase. All property types took a hit from the snow days with single-digit YoY decreases. Across the region, Fall Church City experienced the largest decrease at -33.3%; Fairfax City -17.2%; Arlington County -15.4%; Alexandria City -10.6%; Fairfax County -8.5%; Prince George’s County -6.2%.

Sellers got an average of 96% of their original list price for the final sales price, slightly up from 95.7% last year.

Across the region, these jurisdictions saw an increase in the SP to OLP ratio:  District, Prince George’s County, Arlington County, Fairfax County, and Montgomery County. Alexandria City has a slight 0.5% decrease to 96%. Both Fairfax City and Falls Church City has the most significant decreases.

Median DOM was 44 days across the region, but significant differences among jurisdictions, with the District at only 26 days to Falls Church City at 92 days.

Most jurisdictions did not experience a large difference in the DOM compared to last January, but Fairfax City dropped from 54 to 28 days and Arlington County dropped from 53 to 41 days. Prince George’s posted 32 days, Alexandria City 51 days, Montgomery County 55 days, and Fairfax County 56 days.

“I wanted to take a moment to thank Amy for all of her hard work and assistance throughout the home buying process. I literally couldn’t have done it without you. But, more than that, I wouldn’t have wanted to do it with anybody else”